A treat isn’t something you should or can eat every day. The word would lose meaning if you did. It also isn’t something you should only do on big occasions. No, you can treat yourself any day;  say one when you’re just walking around, feeling alive and have an extra 10k to burn. If on one of those days you are walking past Brood at Kisementi, pop in and order a Ham and cheese croissant.

Note: Instagram has changed how we eat. Now some people walk around with their plate of food so they can photograph it in the best light. This begs a longer discussion for later. Anyway. The croissant looked…alive. I’m not making that up. It’s a little misshapen and a little larger than their plain ones but that’s because it has a lot to bring to the table. You can’t promise to be a buttery, cheese and ham filled-and yet feather light pastry without taking up the space to make those claims possible. 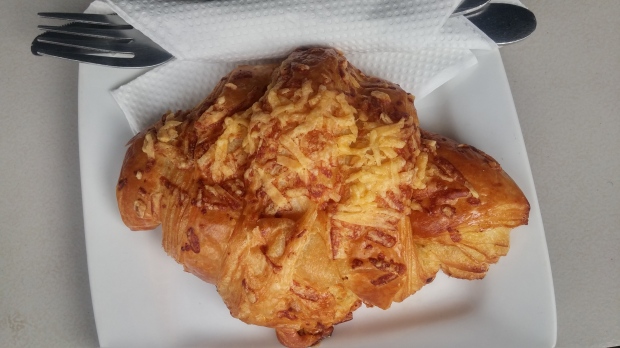 Served with cutlery, your first instinct, as was mine, might be to use the knife and fork. After one cut though, they were abandoned. It takes away the tactile enjoyment of the croissant. Be sure to ask for extra napkins now. Your fingers are going to be greasy with cheese and butter. It’s a treat. Don’t worry about whatever diet you might be on.

It is also warm. Warm. Not scalding boiling hot like what happens at Capital shoppers when you buy something and ask them to warm it for you. (Their power bill must be enormous)

The true wonder of the croissant lies in its fluffiness. How soft it is. In the cheese and the ham yes, but mostly in the airiness. That is why you should hold it with your hands. If you don’t, you will not FULLY appreciate the crispy outside versus the woolly inside. 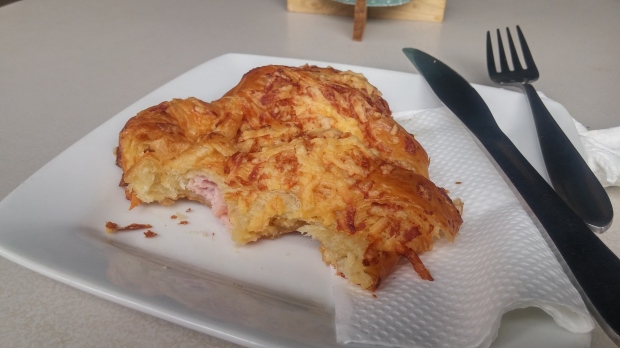 On the first taste you will not find the ham, which is fine because what is there is balanced. I know that sounds vague but that’s what happened. They use a gold yellow Gouda cheese (waitress told me) which went very well with the ham when it showed up.

NOTE: Don’t just pay and say your thank you’s and leave. Go to the bathroom and have a look in the mirror, chances are you will have a large crumb on your face that the waitress was obviously too polite to tell you about.

Pass by Brood and do a little something nice for yourself. The Ham and Cheese croissant goes for 8,500shs.