I am curious; does mood and state of mind affect your enjoyment of food? Say, if you had a breakup meal (i see people in movies doing this) at a restaurant with very nice food would you say the meal was horrible even though it was actually really good?

This Apple pie came to me on a day when the city was at its chaotic peak and i was wondering where i had gone wrong in life to even need to be by the taxi park at that time for that reason. Was it during morning prep in my S4 when i opted to stay in bed while the others went to study at what, 5.30am? Maybe. Martha Driwala, you remained in the dorm too, how are you faring? How is it over at yours?

Anyway. Unlike the breakup scenario, this meal was exquisite. It was like getting a warm hug; the kind where the hugger rubs your back between the shoulder blades. I wonder if this was only because it was juxtaposed against such a tense day…would it have been as good if all was well in my Kingdom? I will venture once more and find out. 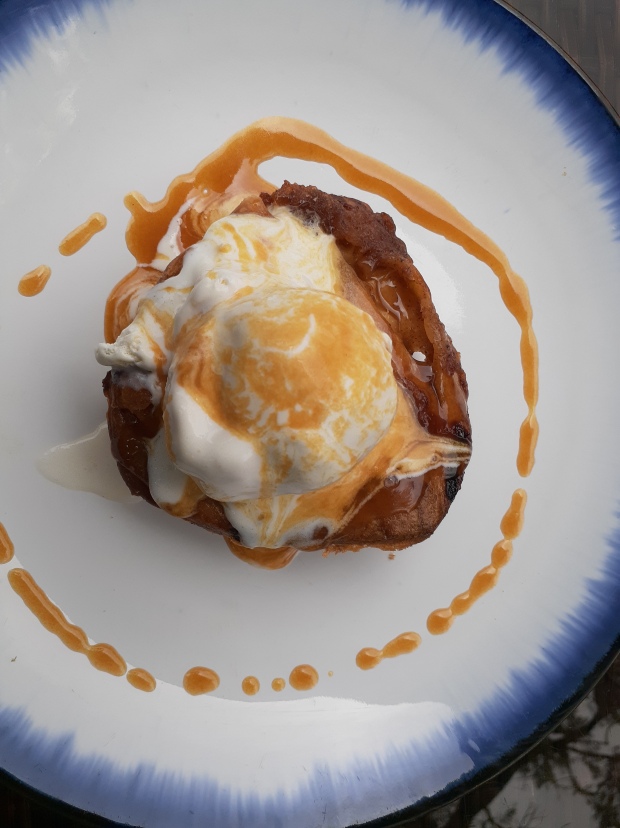 Dessert isn’t really part of our food culture but that did not stop me. I actually reversed the order and had the dessert first and then had food much later. The pie topped with ice cream and ringed with sauce looks unassuming.

This could be one of the best things my mouth has ever tasted, and my mouth has tasted many a thing, food. The pie is warm and the ice cream on top is cold and for some reason, they come together to form a reassuring combo. The warm apple slices have that unique sweetness that can only be attributed to apples. Their sweetness is muted and not as ‘pronounced’ as cane sugar.

I think the reason that Apple pie shows up on many comfort food lists is the cinnamon. Cinnamon has a quality about it that kind of makes you feel that everything will be ok.

And then of course the ice cream, don’t worry, it doesn’t overwhelm. That is vanilla for you. It is content to stay on the side lines and help the main act shine.

The pie is firm and crunchy so it can adequately support the ice cream without the whole structure collapsing in on itself. I was also given a spoon to perhaps scoop it up but i did not really need it. I suppose that is also testament to the quality of the ice cream.

Ya, i could only hear myself. It was reflexive, the same way you might flinch if a meal is too hot. When the apple pie hits your tongue, you will make happy sounds.

Full disclosure, i got this dessert on the house because i wrote this review last time. But no, this is not an ad and no it is not paid for.

The Apple pie is homemade and you know how home made things smell fresh and REAL. I was surprised that something with such full flavor was so understated in aroma. It doesn’t kick down the door to announce itself. It just sits there looking pretty with the faintest waft of pastry.

A slice of Apple pie goes for 15k at Café Mamba, located at Urban by CityBlue hotel.

2 thoughts on “Slice of Apple pie at Cafe Mamba”