We certainly are not short of food festivals in Kampala. There was a rolex festival and even a nsenene one. But the vegan festival is a little different because it encompasses more than just cooking and eating food. It will also involve conversations on organic cultivation and being more environmentally conscious.

Here are 6 things to know before heading down to Dancing cup on Sunday the 24th, courtesy of Lizzy Bell one of the organisers of the Kampala vegan food festival.

The organizers are a diverse group of Ugandans and Uganda residents. Some of us were brought up as vegetarians and later transitioned to veganism, others try to adopt a vegan lifestyle as much as possible.

Three of the organisers are British, and compared to the UK it is more challenging to be vegan in Uganda. The availability of vegan food in the UK has exploded over the last five years, to the point where it is rare to find a restaurant without vegan options. 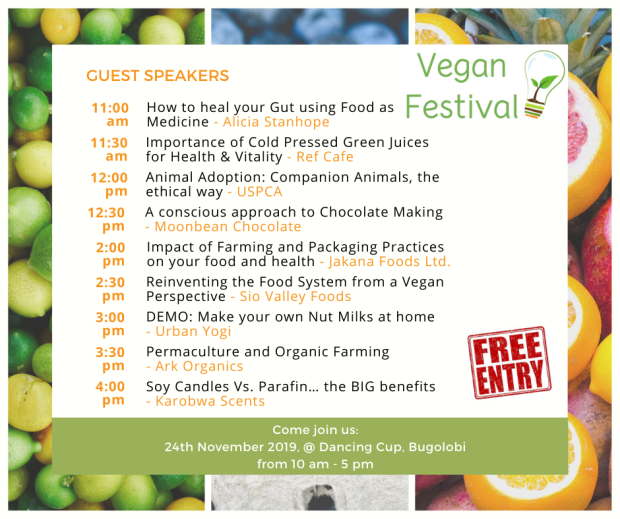 Holy Crepe has offered vegan crepes for many years, and earlier this year even launched a vegan menu. Many cafes and restaurants, including Café Javas now offer soy milk. The Vegan Festival is being hosted by Dancing Cup, which also has great vegan options, including the best vegan pizza in Uganda, with pesto, rocket, tofu, artichoke…. it’s delicious!

Traditional Ugandan food also lends itself well to veganism- beans, posho, rice, greens, vegetable samosas, spring rolls and chapattis. Swahilli curries with coconut and vegetables are also a great option where available. Vegans tend to gravitate towards certain cuisines- you can always be sure to find something in Indian, Chinese and Middle Eastern restaurants

We felt that it was a growing need as many people are turning towards veganism for reasons to do with animal cruelty, the environment or health-evidence consistently shows that a diet which is high in plant based foods such as fruit, vegetables, nuts and seeds and is lower in animal products is associated with better health and lower rates of disease (2015 Dietary Guidelines for Americans).

Despite this interest, people might think it would be too difficult to adapt to this lifestyle in Uganda.  Our intention with the festival is to bring together different vendors who have products that vegans and environmentally conscious people are seeking, and really to show that it is very possible to be vegan in Uganda. We want to demonstrate how supportive the vegan community in Kampala really is.

We want to demonstrate how supportive the vegan community in Kampala really is.

The festival aims to promote awareness of the problematic reality of animal agriculture and help people to explore aligning their actions with their beliefs. In reality, this doesn’t have to mean veganism-it would have more impact on animal welfare and the environment if everyone reduced their meat and dairy consumption than if a small handful of people became vegan.

It would have more impact on animal welfare and the environment if everyone reduced their meat and dairy consumption than if a small handful of people became vegan.

As veganism and eco-living go hand in hand, the festival will include stall holders selling organic and environmentally friendly produced items.

Veganism is a philosophy which rejects the idea of animals as commodities, so in practice this has the most visible impact on the food we eat, however it influences all aspects of our lives, including the clothes we wear and even the makeup we use. Increasingly people are also turning to veganism due to concerns about the environment. For instance, it is estimated that over 90% of global fish stocks have now been fully exploited, overexploited or depleted (UN 2019). The world is waking up to the fact that we simply cannot continue our current lifestyles, and turning to veganism for lessons.

You can join the Kampala vegan community and Kampala Vegetarian and Vegan Community for news and updates.

5 thoughts on “6 things to know before heading to the Vegan food festival this Sunday.”